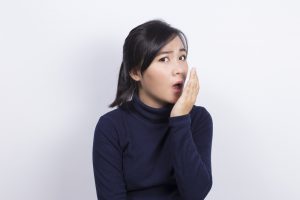 It’s no secret that certain foods don’t do your breath any favors. Dr. Meyers has several suggestions for how to reduce stinky oral-related dilemmas, starting with limiting foods that are associated with less than pleasant scents.

“Garlic, onions, coffee, alcohol, meats, juices and carbonated beverages are just a few of the foods and drinks linked to bad breath,” she says. “Breath odor is most commonly created by volatile sulfur compounds that can be found in many of these items or that can be created when they are ingested.”

Not following a proper oral hygiene routine, which includes regular dental visits, can also contribute to the problem. “Fresh breath starts with a healthy and clean mouth,” Dr. Meyers says. Below are several items you can ingest or things you can do in an effort to make sure your breath is always pleasantly fresh ¾ and keep your mouth healthy, too.

You already know that drinking water is beneficial. Water keeps you hydrated, which helps with a number of physiological aspects like boosting brain health and improving skin’s elasticity; it also acts as a great natural breath freshener.

Drinking water helps flush away odor-causing bacteria that thrive in a dry mouth. Consuming enough water daily also helps to free up food items on the tongue. This, in conjunction with proper oral hygiene, reduces the accumulation of bad breath-causing particles that can become trapped in your mouth.

Most yogurts contain some probiotics, but look for labels that specify “fortified with vitamin D” and “contains probiotic bacteria.” Probiotics are the good bacteria that can help change the “balance of power” in your mouth from a bad bacteria population to a good one. Healthy populations of good bacteria will naturally freshen your breath.

In addition to fortified yogurt, milk — from fat-free to whole — has been found to fight bad breath. We can thank milk’s fat and water content for breath-freshening ability, particularly when garlic is the culprit, according to eatthis.com.

Chomp on Xylitol vs. Sugar

Reach for gum and mints that contains xylitol, a sugar alcohol that doesn’t feed bacteria, instead of sugared chewing gum. Chewing gum will promote saliva production, which will then create a slippery coating on teeth and gums that keeps bacteria from sticking. Wash down each meal with a mint or gum with xylitol for about five minutes.

Xylitol is a low-glycemic food that doesn’t promote dental cavities. Just watch that your furry friends don’t get into the xylitol. While it’s safe for humans, it can be harmful or even deadly when ingested by animals.

An Apple a Day…

If you love garlic, turn to a raw apple to keep your breath pleasant. A raw apple neutralizes the mouth odors that arise when you eat raw garlic. In fact, a study published in the Journal of Food Science confirms the power of a raw apple to combat offensive breath caused by garlic. When participants consumed garlic and were given raw, heated or juiced apple (one of the many foods tested in the study), those who ate raw apple had significantly reduced bad breath within 30 minutes. Raw lettuce also did the trick, according to the study.

Try turning to tea tree, thyme, oregano, clove, cinnamon and cardamom to tame toxic breath. Chewing leaves or a pod of these herbs will help freshen breath. Green herbs should be fresh since some of the herbs’ volatile oils are lost when dried. Parsley, basil, and mint are also beneficial herbs in beating foul mouth odors into submission.