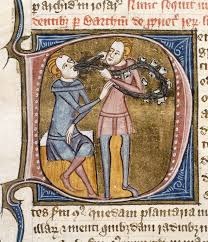 How do our teeth compare with the teeth of our European ancestors in the Middle Ages?

Surprisingly, our ancestors weren’t as backwards as we would think. How could that be?

Those who lived in the Middle Ages lacked the greatest element that causes teeth decay: sugar!

Sugar was very rarely used, and could be prohibitively expensive. Honey was occasionally a medieval cooking ingredient and naturally sweet fruit products were also eaten. As a consequence, those who lived in that time period had a diet that was actually better for their oral health in many ways than ours: low in sugar and high in grains, fruits and vegetables and calcium.

We may also mistakenly think that these oldtimers didn’t use teeth cleaning products, because they had no access to commercial dental care products. But archaeological evidence indicates that our ancestors did manage to use homemade tooth powders and mouthwash, residue of which has been found on their dental surfaces as well as in ancient containers. We know through diaries and excavations what some of these potions contained. Sage, charcoal and pepper were popular ingredients.

The greatest risk to Middle Age teeth, then, was not diet. It was actually damage. Food was “heartier” in the bad sense. It was grittier, meat was tougher, bread was denser. Chewing on these items caused more extensive wear and abrasion on the enamel and even tooth loss.

What was clearly inferior in the Middle Ages was the practice of dentistry. It was primitive at best, fatal at worst.

In the end, the actual physical evidence of Middle Age teeth tells us the whole story. There was lower incidence of cavities but higher examples of worn enamel. Our ancestors appreciated clean, white teeth, they did the best they could with the knowledge they had, but their teeth were also subject to certain environmental stressors that we can avoid now.