If you wake up regularly with a sore jaw and headaches, or you’ve noticed tiny fractures in your teeth, you may be grinding your teeth — and you’re not alone.

Many people grind their teeth at night and many may not be aware they are doing it, according to American Dental Association. In fact, the malady, in medical parlance, is called bruxism and usually takes diagnosis by a dentist to identify it.

ADA spokeswoman Maria Lopez Howell, who is also a dentist, told the Associated Press in an interview that many times people have no idea they grind their teeth at night.

“A lot of times someone else tells them,” she said. “We will have patients who come in and say ‘Oh my wife grinds her teeth,’ or a parent saying ‘my child is really grinding’ so someone who listens to them while sleeping will report that.”

Teeth grinding can be caused by a number of things, including: anxiety, stress, exhaustion or signs of a sleeping disorder, like an apnea, according to Howell.

The ADA stresses that people who are grinding their teeth should see a dentist to get to the bottom of why they are grinding and determine if it’s a sign of something more serious like sleep apnea.

“It’s important to talk to your dentist about if you have any sleep disorders, because you don’t want to miss an opportunity to see whether you need something other than a night guard,” Howell said.

And it’s not just anxiety and stress that can cause grinding.

A recent study from Journal of the American Dental Association (JADA) found that some behaviors, including overuse of alcohol, caffeine and tobacco may increase the risk of teeth grinding.

Drinking alcohol and smoking tobacco were both found to more than double the odds of teeth grinding, while heavy caffeine drinking increased the odds by one and a half, according to the review of seven studies ranging in size from 51 to more than 10,000 people.

What are the Symptoms?

People grind their teeth during the day, at night or both. The ADA listed several symptoms that may indicate teeth grinding, including waking up with a dull headache, sore jaw, sensitive teeth, or even notice fractures in their teeth. While some may brush off teeth grinding as no big deal, going untreated can cause a problem later.

Howell said many people don’t recognize that the jaw’s temporomandibular joint is just that — a joint — and, like any other joint,  it can suffer from a systematic disease like arthritis.

“The teeth are part of the mouth, but the whole chewing complex is part of a joint and that joint can get arthritis just like the hip, knee or any other joints. I think people really discount or just don’t realize that,” she said.

How can I treat teeth grinding? 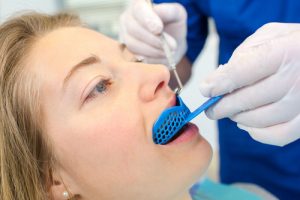 While there are a slew of options from over-the-counter plastic molds to companies that will send you casts for your mouth, The ADA recommends that people consult their dentist to find out the cause of their grinding and get a customized treatment plan.

“Bruxism needs to be teated by a doctor, a mouthguard is something that provides protecting against blows in sports for instance, but bruxism is a condition that needs to be treated by a dentist with a night guard or splint,” she said. “This actually involves the joint; we are protecting the joint and the teeth, and it needs to be done with experience and knowledge of that whole chewing complex.” 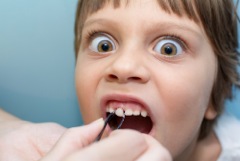 Managing a patient’s actual or perceived pain is difficult enough, but pediatric pain management takes that difficulty to a whole new level. In truth, there’s very little a hygienist does during a pediatric cleaning that causes actual pain. Sure, there may be an occasional pinched lip, accidental pressure put on a loose tooth or even a slip with a scaler. (The most commonly uncomfortable thing asked of young patients is asking them to close on a bitewing tab for x-rays.)

Like our medical brethren and their oath of “First, do no Harm,” the American Academy of Pediatric Dentistry emphasizes to dentists: “don’t hurt them!” The AAPD, in a 2012 policy statement on pain management, begins with these two recommendations:

Let’s use the example of nervous little Branton, an 8-year-old who has made it clear of his displeasure visiting the dentist. Whether real or perceived, his cries of “ow, ow, ow, ow,” deserve my recognition — even if there’s a reasonably good chance he was faking it.

By asking, “Oh, no, what happened?” it gives him an opportunity to explain. Maybe I really was pinching his lip without knowing it, or maybe he was just trying to delay the inevitable. Either way, I need to assess the reason for his reaction and decide how to handle it.

If his lip was being pinched, it could be because his mouth is small, in which case I needed to adjust my approach. Maybe I was distracted and not paying attention, in which case I would apologize, admit it was an accident and promise not to do it again. Mindfulness can be an asset with pediatric patients.

The second recommendation of the AAPD — to use non-pharmacologic and pharmacologic strategies to reduce pain preoperatively — can also address both actual and perceived pain.

An example of a non-pharmacologic strategy would be if a loose tooth were tender, I would concentrate on mindfulness and find another fulcrum. Pediatric dentists also manage the pain of operative treatment in various ways: local anesthetic, preceded by a good topical anesthetic, can take care of simple dental procedures. (Most children who have asked me about shots seem to take the idea in stride.)

Sedation is another option used in pediatric dentistry. Conscious sedation, for instance, is where the patient is conscious but rendered free of fear and anxiety. One of the specific goals of conscious sedation is to reduce the perception of pain and discomfort while enabling the child to be alert enough to respond to a directive such as, “stay open.”

Unlike adults, children rarely have “general sensitivity,” but if that’s the case, pre-polishing (with a product like Colgate Sensitive Pro Relief) can take care of the problem.

Patience is the key. By staying mindful, using all the tools at our disposal, employing lots of “tell-show-do,” and knowing that we will repeat ourselves fairly often, any actual or perceived pain can be kept to a minimum.